Episode 1: The Code of Silence Laurel, Sarah, and Ashford discuss the 1st issue of Helena Bertinelli's Huntress!  Released back in February 1989, this comic pulls no punches, crosses the line several times, and has a lot of exposition and action packed in one issue.  Tell us what you think.

At night in the city, a young woman is assaulted by a knife wielding attacker until a caped shadow swings down, kicking the man in the face. It’s the Huntress and she beats the holy heck out of this guy.

From the woman’s wallet, Huntress learns the woman’s name is Helena, “I used to know somebody with a name like that,” she says “a long time ago.”

Our scene shifts to that long ago time when an innocent young Helena Bertinelli was picking out a candy bar as the shop owner yells at his son for telling a friend about his father’s relationship to the mafia.

A sunglass wearing stranger enters the store, as the father continues in the background, “In the old country they had a name for it. It’s called Omerta. That means ‘silence’.” “Something happens, you get into a jam, you tell nobody. It’s a family matter.”

Helena brings her candy bar to the owner. He recognizes her as Guido Bertinelli’s daughter and she’s delighted when he tells her to take the candy and gives her an extra box to give to her father.

As Helena leaves the shop, the man in sunglasses calls to her, telling her he too is a friend of her father and says he’ll give her a ride home. Apparently Helena hasn’t understood stranger danger because she blithely gets into the car.

Later that night, Guido Bertinelli is yelling at his underlings about his daughter’s kidnapping. His distressed wife comes downstairs and he pauses to comfort her. Just then the cops pull up outside. They are bringing Helena home. But this little girl with the torn shirt sleeve says nothing about what happened, says nothing at all, only smiles an eerie blank smile.

Helena’s father decides to send her away to school and years later the college aged Helena is chaffing under the watch of her constant bodyguard. He insists “I have a responsibility to your father to see that you’re safe.” As she gets in her car he tries to impart one last truth: “If you can’t protect yourself, someone will always have to do it for you.”

Helena arrives at her parent’s home where a family dinner is underway. But the happy scene is interrupted by a darkly costumed man who begins shooting. As Helena plays dead among the many victims, the gunman signs his “work” by writing ‘Omerta’ on the wall in her mother’s blood. But Helena’s father is not yet dead and she hears him taken away by the killer.

Later, a grieving Helena meets with a solicitor. She’s quietly upset that the police seemed to enjoy telling her her father’s body was mutilated, missing its hands and eyes.

Now she is the sole heir to the Bertinelli estate, although the solicitor goes on that it’s nothing like what her father was rumored to have hidden away.  He claims her father always said it would take “blood, sweat, and tears” to get his money from him.

After a lunch with family friends, Helena is distracted, thinking she can’t really trust any of her father’s former friends or her remaining relatives: whoever had her parents killed was somebody close to the family.

On the roof of the car, she sees a shadow shift and manages to duck as a sniper bullet hits the car door. She zigs and zags, dodging shots. She’s nearly run over by a taxi before she’s able to stop it and get in. As they drive away she remembers her bodyguard’s words, “If you can’t protect yourself, someone will always have to do it for you.”

Back at college, Helena packs up her belongings. She’s unmoved when her coach protests she’s throwing away not only her chances of becoming an Olympic gymnast but her entire future.

A knock sounds at the door. It’s her former bodyguard. He claims he heard about the shooting and has come to teach Helena how to protect herself. “How can I trust you?” she asks. “For all I know, you could have been that sniper.” “Good question,” he responds. “That’s lesson one. Trust nobody.”

He doesn’t exactly ask her to trust him but he does say he has a couple acres in the country where he can train her and she agrees to go.

As Helena trains in martial arts, with guns, throwing knives, and more, she thinks to herself: “Helena Bertinelli is gone. She was a façade, masking a great deal of pain. Masking her feelings. Masking her fears. The old façade has cracked.”

In a costume, a mask, and a cape, Helena returns to the city, pensively looking across its rooftops. “To combat the murderers who would destroy my family, crush my own life on their way to consuming everything, I must become a greater, more fearsome destroyer. To track down the animals who prey on the innocent, I must stalk them first. I am no longer their quarry.  I am the Huntress.”

This ends the Huntress number 1. Stay tuned for more discussion.
Check out this episode!
on January 01, 2019 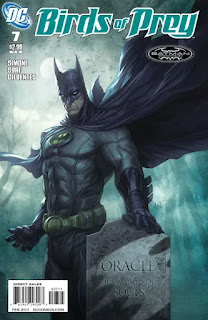